Glenn Thomson, The Poetry of Illusion

In the next instalment of The Culturium’s guest post series, Glenn Thomson reflects upon the making of his documentary on the celebrated Parisian bookshop, Shakespeare and Company, as well as his encounters with other renowned filmmakers, artists, philosophers and poets.

Glenn is an Australian writer, musician and filmmaker who has spent a lifetime in the service of art and creativity. His mission is to empower others in finding and actualizing their own creative journey. He is signed to the French record label, Musea Records, and has released four albums of progressive electronica. Currently awaiting publication of his first novel, he is working as a co-writer on a nonfiction work with the psychologist, Dr Steven Kiely.

THERE WAS A point when I simply realized that to step out of the way was to allow the parade to pass. The parade is unending, multifarious, utterly engaging and benevolent. As the parade passed I realized something far more profound: I was swallowed by it. When I and it cease to be, there is simply this.

The Poetry of Illusion is a film of conversations. None premeditated, forced or contrived. A film of artists, writers, filmmakers, poets, philosophers and energy. It is the energy that lingers, occasionally provokes and, I hope, remakes. Isn’t it remarkable that whatever we invest attention in renovates and remodels our being. That something so seemingly intangible and barely understood acts like an invisible sculptor, shaping and feeling its way into form.

I first arrived in Paris in August 2001. Ten days later, I had purchased a tiny apartment, feeling like some mystic circuit had been activated. I wandered a city redolent with voices and possibility. I realized there was a bargain being offered: dream me and I will return to you. My dream was tactile and clear. It was access to a vast literary tradition at a point where imagination happily dropped its second-hand clothes and offered itself as splendid life in the world.

All our intimate experience is abstraction. Why not allow this divine subjectivity the honour it deserves, instead of seeking to measure its value against what we imagine is some hard-surfaced objectivity embodied in a world of other.

I returned again and again to Paris, and her gifts accumulated: friends, possibilities, introductions, a record label signing. My life as a musician and writer unfolded in ways unplanned and unexpected. In 2009, I met the poet and painter, Panmelys. She is every bit a medium between worlds. Her art and poetry contain a living transmission of something needed and necessary that speaks with such depth and potency.

Panmelys was George Whitman’s successor as host of the legendary Shakespeare and Company tea parties, held every Sunday afternoon in the bookshop. The tea parties stretched back to the 1950s (and before that in Sylvia Beach’s original Shakespeare and Company). They are a communion of spirits. Open and inclusive offerings, celebrations of the power of art to transform and energize a life.

From the very first, I was entranced by Panmelys. Her capacity to read what she called a vibration in those before her at the tea party. To generate a magical current that seduced the nervous and gifted them an experience of a lifetime. She makes poets realize they are poets.

Panmelys introduced me to George just six months before he died, aged 98. He was lying in bed, reading. His voice soft and his eyes even softer. I thanked him for curating our dreams and offering his bookshop, this centre of energy, that had sustained so many.

Years later, his radiant daughter Sylvia, who currently owns and guides Shakespeare and Company with grace and purpose, told me some 30,000 tumbleweeds—George’s name for those who stayed free amongst the books—had lived in that tiny locus of wonders. George had always said he hoped they leave, “enlightened centres of the universe”.

Panmelys and I collaborated on some music together and I edited short sequences of the tea party for her website. We could both sense something of greater scale brewing. She introduced me to René Agostini, Professor of Literature at Avignon University, a poet, musician, philosopher and expert on Celtic traditions and ancient megalithic structures, as well as translator for many of Panmelys’ poems.

René is deeply committed to a path of inner purification and a wonderfully erudite authority on Shamanic, Druidic, Gnostic and Sufi traditions. All inform and elevate his poetry and music, while at the same time lifting his discourse to a revelatory level.

We decided we would make a film together. I wanted to try and generate our own locus of energy that would act as a living resource for all that may wish to enter its embrace. We were joined by my friend, the extraordinary filmmaker and artist Véronique Aubouy, whose film Proust lu has become an internationally recognized sensation, currently some 120 hours in length and capturing a page-by-page reading of À la recherche du temps perdu by over 1,200 readers.

Two works inspired: La véritable histoire d’Artaud le momo, an extraordinary oral history of Antonin Artaud, and Les heures chaudes de Montparnasse, Jean-Marie Drot’s luminous, epic rendering of Montparnasse as an epicentre of art and literature. Movements and collectives have always fascinated me, especially how much is projected upon them by their audience. An act that is, in itself, a creative fuel; in some ways of far greater benefit to those that come after than the very subjects of adoration.

We filmed over the summer of 2015 and it was evident from the very first time the camera rolled (a moment captured in episode one of the podcast, Sing The Body Electric) that something was guiding and moving everyone involved. A sense of being in the service of what Panmelys calls the opaque or greater spirit, what René terms superior energies and what I might call the ground of being. The film presented a portrait of artists in relationship to this source, not simply of inspiration, but of the very works themselves.

The film also features the truly unique Lex Paulson. A man well deserving of the appellation, Uomo Universale. Lex acts as a lightning rod, conducting a synthesis of vast, classical traditions with the present opportunities and threats posed by our modernisms. He is a consummate communicator, without a trace of arrogance or elitism.

Sylvia Whitman joined the project as light bringer and dream maker. As she said just before the camera rolled, “The bookshop owns me, I don’t own the bookshop.” In truth, she carries the inspiration of her father to new and expanded heights. Her delicious anecdotes and radiant energy give both a history and hope for what lies ahead.

At nearly two-and-a-half-hours long, this is a salon you are free to enter and leave as will and world require. It is always welcoming and offering living insights. I am reminded of Véronique’s own Proust lu and her recounting that it is impossible to experience it all at once, “You always fall asleep, or you go away, you go to eat … but it doesn’t matter. It is time. It is a big parenthesis of time.” Indeed it is. It is enough to answer the invitation, to join the celebration. We are saving your place. 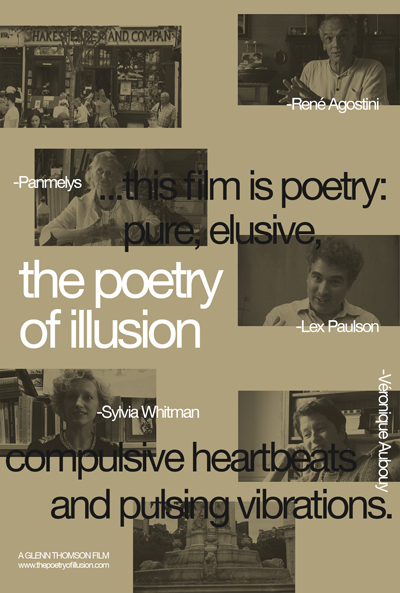