The marriage of heaven and hell

Eric Nicholson is a retired art teacher living in the north-east of England. He is a member of Newcastle’s Literary & Philosophical Society and enjoys countryside conservation, writing, singing in a choir and fell-walking. In this week’s guest post for The Culturium, Eric reflects upon the way in which William Blake’s illustrations of the Book of Job are a beautiful visual depiction of the individual’s inner passage from turmoil and hopelessness to freedom and release.

“I am presently writing a book about Blake’s Job engravings and exploring how his visual narrative relates to our own spiritual journeys. As a Soto Zen Buddhist, I am particularly intrigued with Blake’s system of regeneration; how to, in his well known words, ‘cleanse the doors of perception’, and even, how to overcome the extreme human experience of despair. My first attempt at a full-length book was one about Renaissance Art and Self-Enquiry. For the last year, I have been looking at Blake’s Job engravings and paintings and quickly realized that Blake’s re-interpretation of the Job narrative had parallels with the Buddhist idea of dukkha or suffering and how best to deal with it. The following is an extract from the Introduction to my second book.”

“All the while my breath is in me, and the spirit of God is in my nostrils;
My lips shall not speak wickedness, nor my tongue utter deceit.”
—The Book of Job, 27:3

WILLIAM BLAKE’S TWENTY-TWO engravings about the biblical Book of Job are the culmination of a forty-year preoccupation with the subject. In the mid 1780s, he completed a drawing showing Job’s wife and his friends. This was followed by nineteen stunning watercolours illustrating the whole narrative of Job but filtered through Blake’s unique vision. In 1821, John Linnell borrowed the watercolours and traced the series, which Blake then coloured. Two years later, Linnell commissioned the engravings that Blake made on copperplates using a “relief line” technique. Considering the small size of the black and white prints (8.4 x 6.5 inch), the richness of both the pictorial elements and the intellectual content is astonishing. It is no wonder that these final Job engravings, made near the end of Blake’s life, are so deeply felt and masterful in technique. Nietzsche said something about if you stare long enough at the abyss, the abyss will stare back. This seems to be what Blake did; in any case his positive vision has been created in the crucible of his own suffering.

To our twenty-first century eyes, Blake’s visual work can appear at first sight archaic and naïvely anthropomorphic. However, once we get past the seeming barrier of anthropomorphism, we can appreciate that, in fact, his work is deeply spiritual, and at the same time, humanistic and a much needed counterbalance to scientific materialism. The fact that nearly all of his visual representations, done throughout his life, include human figures is deeply significant, given that today the stature of the individual has diminished so alarmingly. Homo economicus seems to have completely replaced homo spiritualis. The fecundity of his visual imagery is one thing and the other element, of course, is his radical spiritual critique of the human condition. These two, the visual and spiritual, cannot really be separated, especially in his later “prophetic books” and in these Job engravings. There is a perfect marriage of content and form here. Blake himself was confident that he had a many-layered spiritual message to proclaim. He urged his readers to make the effort to unravel his rich mythology:

I give you the end of a golden string,
Only wind it into a ball,
It will lead you in at Heaven’s gate
Built in Jerusalem’s wall.
—William Blake, “And did those feet in ancient time” (aka “Jerusalem”),
Milton: A Poem in Two Books

There are many illuminating books and commentaries about Blake’s system and about the Job engravings. However, this book is not a straight-forward commentary on Blake’s illustrations of the Book of Job. Instead, I interpret Blake’s series of illustrations in spiritual terms relevant to life today. I relate his ideas to Buddhist thought as Soto Zen Buddhism is the practice of which I have first-hand experience. The correspondences between the two are remarkable. The historical Buddha said, “I teach only one thing—suffering and the end of suffering.” Dukkha was the Sanskrit word traditionally used and “suffering” is a rather crude translation of its meaning: an unavoidable, universal, unsatisfactory element to corporeal life is a better way of thinking about it. Mick Jagger’s lyrics in Satisfaction also describe dukkha in a popular context. As the whole narrative of Blake’s Job is concerned with a person sinking into utter despair and his subsequent redemption, there is an obvious link with Buddhist thought (suffering and the end of suffering). Many of us today feel marginalized and alienated; mere cogs in the wheels of society. Mental health issues feature regularly in news programmes and in other media. “Dehumanized” is a word often used to describe our consumerist society. Our response to this dehumanization is often to seek refuge in hedonism or in exclusive family pursuits. This is merely to compound or avoid the basic problem. Blake’s solution requires deep contemplation; it requires a journey inward similar in many ways to Joseph Campbell’s “Hero’s Journey”. We can all be heroes but it will demand courage; it is not the way of the world. Can we make this journey without denouncing the world? Are there, in fact two things; ourselves and the world? In the last of the Ten Ox Herding Pictures, the sage returns to the world “with bliss-bestowing hands” after realizing “enlightenment”. I am not a sage. I am just an ordinary human being to whom the question of “peace of mind” is the most important question in the world. Perhaps you too are interested in this question. If so you may find Blake’s Job speaks to you as it does to me. Please do not be put off by the biblical context of Blake’s Job. Perhaps you have experienced the authoritarian judgementalism of institutional religion in the name of Christianity. Blake is on your side; he consistently denounces such institutional religion and the harm it does to our spiritual selves. The beauty of Blake’s Job is that it can be appreciated by anyone, religious or non-religious alike. My approach is to look at Blake’s twenty-two illustrations as a narrative describing the despair and subsequent rebirth and redemption of Job and applying the ideas therein to our own spiritual journeys. We will, therefore, be travelling into some very dark places and using Self-enquiry in the manner of Socrates’ “know thyself”. If, like me, you have sometimes felt that your life consisted of one mistake after another, this might be the book for you. Needless to say, to get the most out of the ideas herein we will have to be ruthlessly honest with ourselves and be prepared to dig under the surface of our personas. That is the only requirement; you do not need to accept any system, any religion, or anyone’s ideas about God. Our journey will be a shared journey where I hope you will engage with the arguments. We will discover new places and new ideas; even I don’t know a good part of the terrain as we set out together. Blake will be our wise guide.

[Eric Nicholson’s commentary on William Blake’s illustrations of the Book of Job, complete with twenty-two engravings, will be published in 2018.] 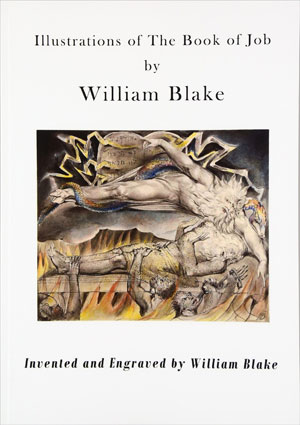