Love, the lover and the Beloved

“Before this there was one heart
But a thousand thoughts
Now all is reduced to
There is no love but Love.”
—Fakhruddin ‘Araqi

Philip Brown is a long-time resident of Canberra, Australia. He spent his working life teaching children with severe and multiple disabilities and developing training programmes to prevent the physical and sexual abuse of people with disabilities. To this end, with his wife and professional colleague, Veneta Amies, he co-developed and published SoSAFE!, a training programme designed to prevent such abuse.

Over the last 40 years Philip has practised meditation of various kinds. For 22 years, he has been a student of the Tibetan Buddhist “Dzogchen” Master, Chogyal Namkhia Norbu, and prior to that practised Transcendental Meditation and Vipassana Insight Meditation. Since the age of 14, when he first read Aldous Huxley’s The Perennial Philosophy, he has had an abiding interest in this philosophy and the field of comparative religion.

In this week’s guest post for The Culturium, Philip offers us a selection of sips from the sublime compositions of one of Sufism’s finest poets.

SUFISM IS A wisdom teaching grounded in Primordial Reality. Its goal is to become the perfect mirror of the Formless through the purification of the heart. “In Sufism, as in most other authentic traditions, it is possible to become aware of the metaphysical transparency of forms and to be able to contemplate the One in the multifaceted manifold.”

“Fakhruddin ‘Araqi was contemporary with other giants of Sufism such as Ibn ‘Arabi, Jalaluddin Rumi and Sadruddin Qunawi, men whose teachings dominate Sufi spirituality to this day. He himself was a leading light in a period so luminous that its brilliance still dazzles the eye some seven centuries later.

“‘Araqi was a Gnostic who spoke the language of love. For him, as for Sufism in general, love is not juxtaposed to knowledge. It is realized knowledge. The Truth, which is like a crystal or a shining star in the mind, becomes wine when it is lived and realized. It inundates the whole of man’s being, plucking the roots of his profane consciousness from this world of impermanence and bringing about an inebriation that must of necessity result from the contact between the heart of man and the Infinite … Thus ‘Araqi sees the phenomenal world not as a veil but rather as a mirror reflecting the infinite noble qualities and possibilities of Radiant Perfect Being.”

The Divine Flashes is especially beautiful as it intersperses poetry with lyrical prose, often with the former an ecstatic rendering of the latter. Furthermore, there is a sense in which the Divine Flashes is a union of the Western and Eastern Schools of Sufism. The Divine Flashes was inspired by one of Ibn ‘Arabi’s major works, The Bezels of Wisdom. Born in Spain, Ibn ‘Arabi is considered by many Sufis to be the greatest of all Masters and his writings are revered as great treasures.

Fakhruddin ‘Araqi was one of the most preeminent figures of the Eastern School, which was especially regarded for its musical and poetic expressions and was enriched by the great spiritual jewels of the East, including both Hinduism and Buddhism. “‘Araqi was at once a metaphysician of the Ibn ‘Arabi school of Sufism and an exceptional artist of the Persian school of Sufism (which was to culminate with Jalaluddin Rumi).” Hence in the treasure, which is the Divine Flashes, we have the infinite vision of Ibn ‘Arabi rendered into the most exquisite Persian poetry, written in the language of love by the master poet of this genre, ‘Araqi.

Sufi poets in general, and ‘Araqi in particular, often choose to speak of Reality in terms of Love, the Beloved and the lover. In this usage, Love refers to the Absolute or Essence, the Ground of Being, whilst lover and Beloved refer to seeker and Sought, person and God, creation and Creator, etc., respectively. Eternally, “there is but One Reality: Love or Sheer Being, which manifests Itself in two forms, the lover and the Beloved”. The lover is cast as masculine, the Beloved as feminine. This casting can be changed at will as the subject matter radically transcends such differentiation.

The following collage has been rendered from Fakhruddin ‘Iraqi: Divine Flashes, translated by W. Chittick and P. Wilson, 1982. The poetry that follows is like an exquisite wine, which benefits from being consciously tasted and savoured, with a natural pause between sips.

“The Morning of Manifestation sighed,
the breeze of Grace breathed gently,
ripples stirred
upon the sea of Generosity.
The clouds of Abundance poured down the rain
upon the soil of preparedness;
so much rain that the earth shone with Light.”

The lover, then, nourished with the water of life, awoke from the slumber of non-existence, put on the cloak of being and tied around his brow the turban of contemplation; he clinched the belt of desire about his waist and set forth with the foot of sincerity upon the path of the Search.

The lover desires to see the Beloved with Certainty’s Eye, and wanders a bewildered lifetime in this aspiration. Then suddenly with his heart’s ear he hears a voice:

“The magic spring
that gives eternal Life,
is in your own heart
but you have blocked the flow.”

Then the Eye of Certainty opens, and staring inwardly at himself, the lover finds himself lost, vanished. But … he finds the Beloved; and when he looks still deeper, realizes the Beloved is himself. He exclaims:

“Beloved, I sought you
here and there,
asked for news of you
from all I met;
then saw you through myself
and found we were identical.
Now I blush to think I ever
searched for signs of you.”

Everyone with eyes sees just such a vision … but remains ignorant of what he perceives. Every ant which leaves its nest and goes to the desert will see the sun but not know what it sees. What irony! Everyone perceives Divine Beauty with Certainty’s Eye, for in reality nothing exists but Transcendent Unity:

“They look, they see, but do not comprehend.
They take no pleasure in the View,
For to enjoy it one must know
through the Truth of Certainty
What he is seeing,
through Whom, and why.”

And so, the lover seeks the Vision in order that he might pass away from existence; he knocks on the door of non-existence, for there he was once at peace. There he was both seer and seen, Both viewer and viewed … Because nothing in himself. When awakening from that peace and coming to be, he became the veil of his own sight and was deprived of Vision:

“Know yourself: a cloud
drifting before your sun.
Cut yourself off from your senses
and behold your sun of intimacy.”

If this screen … which is you … is struck from before your eyes, the Beloved will find the Beloved, and you will be entirely lost. Then you will say:

“By day I praised You
but never knew it;
by night slept with You
without realizing;
fancying myself
to be myself;
but no, I was You
and never knew it.”

With the Eye of the Heart the lover now sees:

“The Beloved’s Loveliness owns
a hundred thousand faces;
gaze upon a different fair one
in every atom;
for She needs must show
to every separate thing
a different aspect
of Her beauty.
Gazing from every angle
on that precious countenance
in Thy face we see our own—
hence the infinitude of descriptions.”

Thus it is that every lover gives a different sign of the Beloved and every Gnostic a different explanation; every realized one seems to point to something different, yet each of them declares:

“Expressions are many
but Thy loveliness is one;
Each of us refers
to that single Beauty.”

All quotations and the collage (Divine Flashes 2, 25, 27, 5) are drawn from Chittick and Wilson’s wonderful translation and commentaries, in which they have transliterated ‘Araqi’s name as ‘Iraqi (in other works, the spelling ‘Eraqi has been noted). 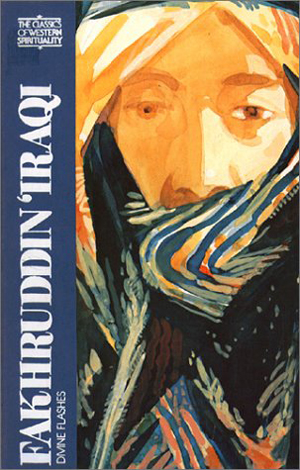