Joep Franssens, Harmony of the Spheres

I ALWAYS FIND it difficult to write about music, which is not altogether surprising when you consider I am trying to use words to describe that which is creatively expressed beyond the verbal realm. More specifically, the work of contemporary Dutch composer, Joep Franssens (born 13th January 1955), is typically aligned with the Holy Minimalism movement—represented by artists such as Arvo Pärt, John Tavener, Pēteris Vasks and Henryk Górecki—which seeks to manifest the transcendent sound of the sacred, a place far removed from the secular world: “I did not have a religious upbringing,” says Franssens. “I am not Russian Orthodox like Pärt or Catholic like Górecki. I stay away from everything to do with the institutionalization of religion. But there is something. There is more than we can perceive.”

Harmony of the Spheres is one such composition that musically distils the mystical domain. Written over a period of nearly seven years and drawing inspiration from Spinoza’s Ethics, it is Franssens’ magnum opus. Listening to the five-part arrangement for mixed choir a cappella, as well as mixed choir and strings (2001)—of which “Movement III a” is quite simply enchanting—transports us into the “holy now” whereby past and future resound as mere echoes of the design overall. Indeed, rather than the piece being driven forward with a propelling progression coupled with the development of leitmotifs more typical of Western classical music, the composition presents us with a standstill, so to speak, whereby melodious movement in time is usurped by an emphasis on the sound itself in stasis.

Unlike the excruciating emotional response triggered by the atonality and structurelessness of most contemporaneous music for orchestra, the acoustic encounter of Harmony of the Spheres is one of joy and unity, akin to a religious experience. The lingering reverberation in the mind, long after the final note has been played, keeps thought temporarily abated, enabling the inner being to steep in the present moment and receive the divine presence within.

I borrowed the lyrics for my five-part choral work, Harmony of the Spheres, from Spinoza’s Ethics. I first read that work when I was about eighteen. Spinoza’s worldview gave me a great sense of accuracy. Yes, this is how the world really should be! I was so moved by it that I wanted to do something with it, even though I didn’t know then that I wanted to be a composer.

Harmony of the Spheres, which lasts an hour, has a long history. The first part dates from 1994 and was originally a loose composition. It was only when I listened to it in a live performance that I realized: ‘This work is not finished!’ The final part followed in 1995, the intermediate parts were composed later. Over the years it became clear what I was doing and it was only at the end that the title occurred to me.

Harmony of the Spheres has nothing to do with the Pythagorean conception of the harmony of the spheres and the relations of tones and overtones to the planets. However, there is a close connection between the five parts—composition and content. The text in the first and last part is about connectedness between people. The second and fourth parts are about the realization of the individual, of your personal abilities to grow.

Harmony of the Spheres expresses a holistic world view. The different spheres of life can be in harmony with each other like the different notes within one chord, while still retaining their own individuality. The middle part is about God. Where people treat each other with sincere friendship, there is the divine presence. At least that is how I have interpreted Spinoza’s lyrics.

It is not my intention to establish a moral with Harmony of the Spheres. I do see it as my magnum opus and I sketch my world view—with Spinoza as an ally. I don’t care what the listener does with that. I am not trying to reform people but I hope my work will catch on. Once I listened in the car to a live concert recording where you just heard how a stillness slithered and then discharged into a rare exuberant applause. Then you know: it happened. I hope so for my music too.

Finding connection is very essential for me as a composer. It is not the task of the audience to understand a composer but it is the task of a composer to make music with which he reaches an audience. Pop music is an example. It’s all about the here and now—about connecting with a living audience. Don’t wait for posthumous recognition!
—Joep Franssens, interviewed by Mischa Spel 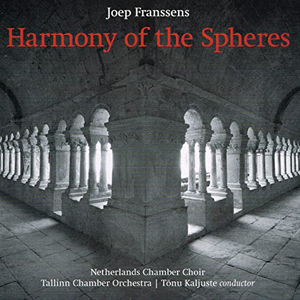