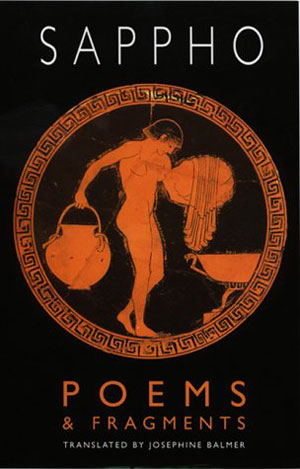 “Love makes me tremble yet again, sapping all the strength from my limbs;
Bittersweet undefeated creature—against you there is no defence.”
—Sappho

THE ANCIENT GREEKS had a lot to say about the nature of love. According to the contemporary cultural thinker, Roman Krznaric, they recognized six types: Eros, or sexual passion; Philia, or deep friendship; Ludus, or playful love; Agape, or unconditional love; Pragma, or longstanding love; and Philautia, or love of the self, either positively (self-worth) or negatively (narcissistic pride), similar to Rousseau’s amour de soi and amour-propre.

The great philosopher, Plato (428/427 BCE–348/347 BCE), naturally had something to add to the discussion. In one of his most famous works, The Symposium, the subject of love is discussed at a drinks party through the medium of a dramatic dialogue. Seven of the guests take it in turn to deliver a speech outlining their position, including Socrates (470/469–399 BCE), Plato’s teacher.

Socrates’ address recounts an exposition told to him by Diotima, a contemporaneous female philosopher. Expounding the nature of beauty, she demonstrates how love, and in particular falling in love, can lead to worship of the Divine itself, in order words how eros can be a gateway to agape:

‘The correct way,’ she said, ‘for someone to approach this business [the pursuit of love] is to begin when he’s young by being drawn towards beautiful bodies. At first, if his guide leads him correctly, he should love just one body and in that relationship produce beautiful discourses.

Next he should realize that the beauty of any one body is closely related to that of another, and that, if he is to pursue beauty of form, it’s very foolish not to regard the beauty of all bodies as one and the same.

Once he’s seen this, he’ll become a lover of all beautiful bodies … After this, he should regard the beauty of minds as more valuable than that of the body, so that, if someone has goodness of mind even if he has little of the bloom of beauty, he will be content with him, and will love and care for him, and give birth to the kinds of discourse, that help young men to become better …

After practices, the guide must lead him towards forms of knowledge, so that he sees their beauty too … he will be turned towards the great sea of beauty and gazing on it he’ll give birth, through a boundless love of knowledge, to many beautiful and magnificent discourses and ideas …

He will suddenly catch sight of something amazingly beautiful in its nature; this, Socrates, is the ultimate objective of all the previous efforts … this beauty always is, and doesn’t come into being or cease; it doesn’t increase or diminish …

It will appear as in itself and by itself, always single in form; all other beautiful things share its character, but do so in such a way that, when other things come to be or cease, it is not increased or decreased in any way nor does it undergo any change.
—Plato, The Symposium

Plato was a notorious advocate of gender equality; in The Republic, his great discourse on a perfect government, he champions the rights of women and their suitability for “guardianship” in the highest political office of the state.

It is no surprise, therefore, that he highly venerated another female thinker, one he would refer to as the Tenth Muse, after the Nine Muses of Greek mythology. Born on the Mediterranean island of Lesbos, Sappho was a priestess and poet living in approximately 600 BCE. We only know a small amount of her work for most of it—up to nine papyrus rolls—was destroyed by fire.

Indeed, the only remaining evidence of her poetry—four complete poems and a handful of fragments—comes to us either through quotations in various books passed from era to era, or on papyrus leavings and surviving pieces of broken vases and pots. (Interestingly, parts of two previously unknown poems by Sappho, discovered on a fragment of papyrus, were published in February 2014 in the Times Literary Supplement.)

Sappho’s work is in the genre of the lyric—short, personal monodies or poems sung by a single voice. Throughout her verse, she employs all the imagery and symbolism recurrent with the divine goddess and the fertility of her bountiful nature—roses, apples, trees, the moon. More specifically, her work is infused with the multifarious shades of Hellenistic love.

Like Shakespeare’s sonnets, the subject of Sappho’s infatuation is undertermined. Some commentators have focused on stories surrounding her tragic love for a ferryman, Phaon, and her subsequent suicide; others have concentrated on her sexuality and the perceived female homoerotic elements in her work.

Whether or not she endorses lesbianism we can never know but of one thing we can be in no doubt—her poetry is the celebration of sisterly, sensual and sacred love:

Shimmering-throned immortal Aphrodite,
Daughter of Zeus, Enchantress, I implore thee,
Spare me, O queen, this agony and anguish,
Crush not my spirit

Whenever before thou has hearkened to me—
To my voice calling to thee in the distance,
And heeding, thou hast come, leaving thy father’s
Golden dominions,

With chariot yoked to thy fleet-winged coursers,
Fluttering swift pinions over earth’s darkness,
And bringing thee through the infinite, gliding
Downwards from heaven,

Then, soon they arrived and thou, blessed goddess,
With divine contenance smiling, didst ask me
What new woe had befallen me now and why,
Thus I had called thee.

What in my mad heart was my greatest desire,
Who was it now that must feel my allurements,
Who was the fair one that must be persuaded,
Who wronged thee Sappho?

Come then, I pray, grant me surcease from sorrow,
Drive away care, I beseech thee, O goddess
Fulfil for me what I yearn to accomplish,
Be thou my ally.
—Sacred-Texts.com, “Hymn to Aphrodite”

In a time when there has been a renaissance in the appreciation of poetry, in particular free versification, it is little wonder that Sappho’s verse is even more popular today than it ever was in the ancient past. After all, what is more enduring than the power of love?