“And myself is you. And we are all that is.”

This week’s guest post features the beautiful and spontaneous poetry of Rafael Stoneman, who currently lives in Oxnard, California. He undertakes transcription work from home, focusing mainly on spiritual material from a variety of different traditions and paths. He is also finishing a certificate in Addiction Studies.

“Mainly, this is a chapter in my life, where rest, silence, enquiry and deep-listening to the heart of hearts is the focus. Sometimes, the occassional poem arises in the midst of this, and has enough merit to compel the fingers to type it down. Like in so many other matters of the unfolding of this life, Sri Ramana Maharshi has been at the core of such discoveries, as finding The Culturium website.

“One of my favourite things to do is to Google: Ramana AND fill in the blank of whatever subject matter you are curious about. I have found many opportunities in this way. When financial pressure arises, I like to contemplate my favourite quote of Ramana’s in relationship to this matter: ‘Engage yourself in the living present. The future will take care of itself.'”

I used to imagine writing the perfect poem,
the all-encompassing poem; a poem that
would enlighten and inspire the heart
and at the same time destroy the ego.

Somehow life took away this imagining.

Life relaxed a bit. The ego no longer needed
to be destroyed because it became harmless.
But it took a lot of trying to destroy it
for this harmlessness to show up;
like this tendency towards violence had to exhaust itself.

Another way to look at it is that there never has
been anything like ego from the start.
But this can be used as a justification or rationalization.
It is true but if it is just an idea, then it is useless.

It really takes going down into the very core of—
the very soul—into the bones, the guts,
it takes a certain kind of reckless courage
to discard all that is glimmering and shimmering and
announcing itself to be beautiful and wise.

But this is just a poem, a poetic verse: reckless courage.
What does it mean?
Perhaps it is a lie. Perhaps it’s just a way to make a point.
It is up to you to challenge such a notion.

It may not take reckless courage at all.
It may be that you never were fooled by a clown’s make-up
and never believed in Santa Claus,
and instead of wanting money from the tooth fairy,
you wanted to save a dog from being tied up and ignored.

So, if what I say doesn’t ring true, throw it out.

You see, we can know that all is one but how we act reveals
what we really care about—what is really in our heart.

And somehow, it always seems to be that each poem is
the perfect poem; each poem is exactly what it needs to be.

I don’t write to make myself feel better.
I write to keep myself from being tempted by that old dead violence
because I really don’t want to harm myself.

And myself is you. And we are all that is.
—Rafael Stoneman, “The Perfect Poem”

Don’t ask me anything about this world.

I know nothing about it.

I’ve put all my interest in the Unknown

And there are no promises in that place.

Here, in this world that you see—

there are such things as success and failure.

The place I am dreaming of is empty—

it has no cause and effect.

Not even love resides there—

for it is too quiet for that;

too unmoving and still.

But every now and then,

there is a story of this world—

And some times that story breaks your heart.
—Rafael Stoneman, “Unmoving and Still”

There’s no telling when the rest of me will get There,

but most of me is already There.

but it turns out, that I am, is too much.

I doubt I can bring such things as breath There,

perhaps even thought won’t be permitted to travel.

Come to think of it, I can’t bring the rest of me There,

because the rest of me, that which is still here,

is all material—blood, bones, and such.

And There, there is no use for such material things.
—Rafael Stoneman, “There”

My God! You are beautiful world!
Your grass, green fields, gravel gray.
Your perfect brown soil, rocks piled.
Wind blowing.
Horses don’t stand in time.
Such beauty! These words come forth.
Rushing to know You!
And again You share Your secrets.
The orange of your tree.
All I need do is listen to Your colors.
See Your sounds.
Feel the presence being lived.
Your mystery is revealed, O’World—
to every lover of nature’s kindness.
Beyond explaining we do come to You.
Simply.
Revealed as Your own voice,
passing thru Your World.
—Rafael Stoneman, “Horses Don’t Stand in Time”, Tears of Grace

Beyond fragile is shattered—
broken pieces of a puzzle that will never make sense.
A crushed jar is not afraid—the damage is done.
Who picks up the pieces with a shaken hand—
unable to stitch or mend?
Who cries softly without tears?
The puzzle board is perfect,
the glass is shining clearly.
The one that wants a picture wants an
explanation in reason,
but this one dissolves when searched for by itself.
The seeker is that which falls away like petals
from a flower
or tears loosened for release.
Vulnerable is strong and strong is fearless.
Tender is caring and caring is love.
The face of forgiveness looks very much like
no face at all.
—Rafael Stoneman, “Tears Loosened”, Tears of Grace

This morning I awake with five dollars to my name.

And an empty gas tank.

Where does the smile on this face come from?

Though I don’t know what I will do today or how I will do it,

I am happy, full of bliss, with the knowledge of the Unknown.

I am an emperor of emptiness!

I may only have a few cents and even less sense

but the universe bows at my feet like a flower.
—Rafael Stoneman, “Penniless Emperor”, Advaita Heart: Nondual Devotion

Since you can’t give up what is not really yours—
Be taken.
See this inability to surrender from the point of view of totality—
Be taken.
Who is to give what to who?
Be taken.
Forgive ignorance—
Be taken.
Empty yourself into your Self.
Be taken.
The ocean is always waving.
Be taken.
—Rafael Stoneman, “Be Taken”, Advaita Heart: Nondual Devotion 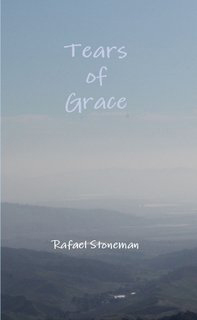