A love letter to the deserts of Egypt

“longing to utter
the unutterable Name”

AUTHOR OF TEN critically acclaimed books of poetry and prose as well as three celebrated collections of aphorisms, Yahia Lababidi‘s work has been featured across the media and generously endorsed by President Obama’s inaugural poet, Richard Blanco. Nominated for a Pushcart Prize three times, he has also participated in numerous international poetry festivals throughout the world, his writing translated into several languages, including Arabic, Hebrew, Slovak, Spanish, French, Italian, German, Dutch and Swedish. He has also recently released an app delivering daily aphorisms straight to subscribers’ smartphones.

In a recent article on The Culturium, Yahia offered us his deeply intimate meditations on the nature of the human condition through a compendium of essays, conversations and reviews, titled Revolutions of the Heart. In this month’s guest post, he shares with us his latest volume of mystical poetry, Desert Songs, exquisitely illustrated by the photography of Zakaria Wakrim.

In the words of Yahia’s Arabic translator: “In the poems of Desert Songs, the poet is a mystic travelling in the worlds of infinity, in the desert, naked, face to face with existence and with language at the beginning of its creation. The photographs of Zakaria Wakrim add yet another dimension to Lababidi’s verses, giving birth to poetry that not only explores the worlds of the desert but also the realms of the human spirit in its nakedness, anxiety and incessant, endless searching, as if life were an everlasting journey, perpetually changing forms from birth to death. In this volume, the dervish, the mystic, the poet continues the journey towards the unknown.”

When I lived in Cairo, Egypt, over a decade and a half ago, I would head to the desert periodically: to empty myself of the city’s noise, overhear myself, and then lose myself.

I approached these desert pilgrimages with the earnest intention and passionate belief that I was going to encounter that part of myself not entirely accessible in other circumstances. In the desert, there is nothing to hide behind, nowhere and no one to turn to. It is where all those mad hermits and mystics—my people!—had their visions. It’s an extreme environment and I suppose I felt that if I flirted with that extremity, in a committed, honourable way, a breakthrough might be granted to me. (If you were somehow avoiding yourself, and you went to the desert, somehow you would meet.) The rumblings of Eternity were there, if you could just be still enough, quiet enough and indifferent enough to your self, your many selves, your many frivolous selves.

Walking, reading, musing, I felt outside space and time and came to realize the necessity of aloneness: aloneness as a prerequisite for the sublime sensations or epiphanies I sought. Sure, you could be alone around people, alone in your living room but if you reached toward this elemental aloneness—one with the sand, the rock, the water, the stars and the sea—you could experience a deeper innocence and purity of perception and as a result become a better witness to the life inside you and around you. The desert doesn’t, really, care much for you. It may, perhaps, want you there, but it doesn’t need you there. It doesn’t seek to appease you in any way. It only wants to declare its harsh, bold truths and if you can stand it, then you might stay.

What you hold in your hands is a slender packet of yearning; poems inspired by my desert retreats over the years. I did not, fully, recognize at the time the nascent thirst in these poetic meditations or how the profound spiritual longing in these reflections was to mystically point for me the way towards a spiritual and religious life—a path I am exploring with wonder and humbly deepening, nearly two decades later. It means a great deal to me that this poetry collection is bilingual and that my words will return to the part of the world that inspired them in its native language. I’m, especially, grateful that the Arabic is rendered by Osama Esber, a respected Syrian poet, translator and publisher whom I’m fortunate to call a friend and who, previously, has translated poetry of mine for Jadaliyya. All of the remarkable photographs accompanying my poems are by a gifted young Moroccan photographer I admire, Zakaria Wakrim, a kindred spirit who knows well the mystery and magic of the desert.

Thank you, Rowayat, for bringing my words back Home, to my beloved Egypt.

ceremoniously, they smile
benign smiles, smiles without guile
men of the cloth, men in robes
men in dresses cut out of the night

exercises in restraint
exorcisms of the spirit
bodies without organs
organs without bodies.

or, as if transfixed
by a gaze, stern-serene
surveying a dream
foreign-familiar

there, begin to uncover
buried in dust and disinterest
the immutable letter
(first of the alphabet) Alif

under the ever watchful eye:
fearsome sun, forgiving moon
bless the magnificent hand
all else is blasphemy, a lie

only striving supreme or pure
can ever hope to endure
the absolute face
the awesome embrace. 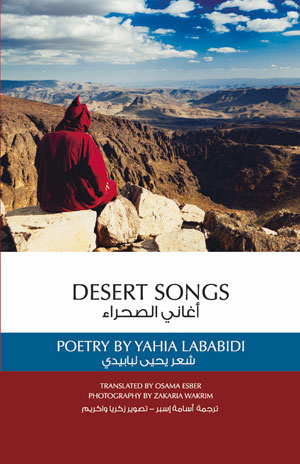