Only the hand that erases can write the true thing

“Understand—through the stillness,
Act—out of stillness,
Conquer in the stillness.
In order for the eye to perceive colour,
it must divest itself of all colours.”
—Dag Hammarskjöld, “Markings”

IN A TIME period when we need politicians and rulers to behave with the dignity, steadfastness and wisdom of a philosopher-king, to coin Plato’s term, it is truly a wonder to discover that such an exemplary statesman can be found in recent history. Dag Hammarskjöld (29th July 1905–18th September 1961) was a Swedish economist and diplomat who served as the second Secretary-General of the United Nations; universally admired as a global peacemaker, US President, John F. Kennedy, called Hammarskjöld “the greatest statesman of our century”. Indeed, the Swede is also one of only two people to be awarded a posthumous Nobel Prize.

Throughout his adult life, Hammarskjöld recorded his thoughts or “markings” (Vägmärken) in a journal, which charted the struggles of his interior journey along the spiritual path. Starting when he was 25 years old and ending only months before his death, his haikuesque poems and prose meditations, in the words of W. H. Auden who wrote the foreword and perfected the translation from Swedish into English, are “the attempt by a professional man of action to unite in one life the via activa and the via contemplativa.”

Citing the great mediaeval mystics, Meister Eckhart and Jan van Ruysbroeck, to be his spiritual mentors, Hammarskjöld believed that “self-surrender” was the only way to “self-realization”. Moreover, he advocated that “singleness of mind” and “inwardness” gave man the strength to follow the call of duty and face whatever destiny was assigned to his unfolding life. Putting his noble precepts into practice, during Hammarskjöld’s term of appointment at the UN Headquarters in New York City, he personally planned and oversaw the construction of the Meditation Room, a space devoted to inner silence right in the very heart of the building where anyone, regardless of their creed or culture, could have the opportunity to turn quietly within.

Sadly, Hammarskjöld’s UN tenure was prematurely and permanently ended when he died in an aeroplane crash (whose cause is still disputed) while en route to Northern Rhodesia to cease-fire negotiations during the Congo Crisis. Shortly after his death, the typewritten manuscript of his markings was found in the bedside table of his New York apartment, together with an undated letter, addressed to the Swedish Permanent Under-Secretary for Foreign Affairs, Leif Belfrage:

Perhaps you may remember I once told you that, in spite of everything, I kept a diary which I wanted you to take charge of someday.
Here it is.
It was begun without a thought of anybody else reading it. But, what with my later history and all that has been said and written about me, the situation has changed. These entries provide the only true ‘profile’ that can be drawn. That is why, during recent years, I have reckoned with the possibility of publication, though I have continued to write for myself, not for the public.
If you find them worth publishing, you have my permission to do so—as a sort of white book concerning my negotiations with myself—and with God.

I am being driven forward
Into an unknown land.
The pass grows steeper,
The air colder and sharper.
A wind from my unknown goal
Stirs the strings
Of expectation.

Still the question:
Shall I ever get there?
There where life resounds,
A clear pure note
In the silence.
—Dag Hammarskjöld, Markings

At every moment you choose yourself. But do you choose your self? Body and soul contain a thousand possibilities out of which you can build many ‘I’s. But in only one of them is there a congruence of the elector and the elected. Only one—which you will never find until you have excluded all those superficial and fleeting possibilities of being and doing with which you toy, out of curiosity or wonder or greed, and which hinder you from casting anchor in the experience of the mystery of life, and the consciousness of the talent entrusted to you which is your I.
—Dag Hammarskjöld, Markings

To preserve the silence within—amid all the noise. To remain open and quiet, a moist humus in the fertile darkness where the rain falls and the grain ripens—no matter how many tramp across the parade ground in whirling dust under an arid sky.
—Dag Hammarskjöld, Markings

Peace—as when long bitterness has been dissolved by tears; the ground bare. Glitter of wide waters in the soft light—
Around me the soft walls of the thaw haze. The cloud ceiling is low, an orange shimmering in the setting winter sun.
In the mirror-world of the water, pale olive against pewter, the bare branches of an alder tree flap slowly, as in a gentle breeze, to the imperceptible movement of the waves.

And then:
In the soft darkness, the lonely flame surrounded by a womb of warm light. The hyacinth, a white cloud above the deep well of gloom in the mirror, barely glimpsed, glittering through the whispering forest of books.

Not for us now, perhaps never for us:
In the silence, the ring of the telephone forever subtracts the conversation we have run away from but never shall escape.
Beneath the hush a whisper from long ago, promising peace of mind and a burden shared.
—Dag Hammarskjöld, Markings

You wake from dreams of doom and—for a moment—you know: beyond all the noise and the gestures, the only real thing, love’s calm unwavering flame in the half-light of an early dawn.
—Dag Hammarskjöld, Markings

Now. When I have overcome my fears—of others, of myself, of the underlying darkness:
at the frontier of the unheard-of.
Here ends the known. But, from a source beyond it, something fills my being with its possibilities.
Here desire is purified into openness: each action a preparation, each choice a yes to the unknown.
Prevented by the duties of life on the surface from looking down into the depths, yet all the while being slowly trained by them to descend as a shaping agent into the chaos, whence the fragrance of white wintergreen bears the promise of a new belonging.
At the frontier—
—Dag Hammarskjöld, Markings

Clad in this ‘self’, the creation of irresponsible and ignorant persons, meaningless honours and catalogued acts—strapped into the straitjacket of the immediate.

To step out of all this and stand naked on the precipice of dawn—acceptable, invulnerable, free: in the Light, with the Light, of the Light. Whole, real in the Whole. Out of myself as a stumbling block, into myself as fulfilment.
—Dag Hammarskjöld, Markings

We all have within us a centre of stillness surrounded by silence.

This house, dedicated to work and debate in the service of peace, should have one room dedicated to silence in the outward sense and stillness in the inner sense.

It has been the aim to create in this small room a place where the doors may be open to the infinite lands of thought and prayer.

People of many faiths will meet here, and for that reason, none of the symbols to which we are accustomed in our meditation could be used.

However, there are simple things which speak to us all with the same language. We have sought for such things and we believe that we have found them in the shaft of light striking the shimmering surface of solid rock.

But the stone in the middle of the room has more to tell us. We may see it as an altar, empty not because there is no God, not because it is an altar to an unknown god, but because it is dedicated to the God whom man worships under many names and in many forms.

The stone in the middle of the room reminds us also of the firm and permanent in a world of movement and change. The block of iron ore has the weight and solidity of the everlasting. It is a reminder of that cornerstone of endurance and faith on which all human endeavour must be based.

The material of the stone leads our thoughts to the necessity for choice between destruction and construction, between war and peace. Of iron man has forged his swords, of iron he has also made his ploughshares. Of iron, he has constructed tanks, but of iron, he has likewise built homes for man. The block of iron ore is part of the wealth we have inherited on this earth of ours. How are we to use it?

The shaft of light strikes the stone in a room of utter simplicity. There are no other symbols, there is nothing to distract our attention or to break in on the stillness within ourselves. When our eyes travel from these symbols to the front wall, they meet a simple pattern opening up the room to the harmony, freedom and balance of space.

There is an ancient saying that the sense of a vessel is not in its shell but in the void. So it is with this room. It is for those who come here to fill the void with what they find in their centre of stillness.
—Dag Hammarskjöld, Inauguration Address, Meditation Room, UN Headquarters 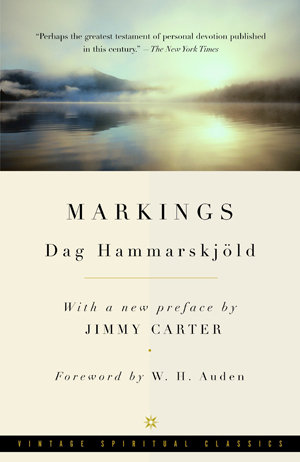