The act of being alone

“We are solitary. We can delude ourselves about this and act as if it were not true.
That is all. But how much better it is to recognize that we are alone;
yes, even to begin from this realization.”

WHILST ENSCONSED IN an Italian mediaeval castle on the Adriatic coast writing the Duino Elegies, what critics believe to be his greatest poetical composition, Rainer Maria Rilke (4th December 1875–29th December 1926) struggled with melancholy and depression, admitting to his host, Marie Taxis: “Things must first get bad, worse, worst, beyond what any language can hold. I creep about all day in the thickets of my life, screaming like a wild man and clapping my hands. You would not believe what hair-raising creatures this flushes up.” And yet, Rilke soldiered on, embracing long periods of solitude throughout his life as a necessary alembic for his creative work, producing some of the most mystical prose and poetry ever to be composed.

Between 1902 and 1908, a few years prior to his magnum opus, the Austrian poet engaged in a correspondence with a 19-year-old student at the Military Academy of Vienna, Franz Xaver Kappus, who sought advice on the art of writing, the power of discernment and the affairs of the human heart. Foreshadowing his own impending difficulties with self-isolation in service of his creative muse, Rilke also addressed the theme of solitude with the young cadet, stating that the discipline for any artist is to resist all distraction and temptation from the outside world and instead, to turn resolutely within. Only then, once we have categorically accepted our aloneness both physically and psychologically, can the magic begin. Three years after Rilke’s death, Kappus published the ten missives, Letters to a Young Poet (Briefe an einen jungen Dichter), in 1929, the compendium quickly becoming a creed for anyone wishing to carve out the creative life, not least in solitary confinement but also during periods of utter turmoil. In these unprecedented times, Rilke’s elegant, sagacious treatise couldn’t be more timely.

Rome, 14th May 1904
And you should not let yourself be confused in your solitude by the fact that there is something in you that wants to move out of it. This very wish, if you use it calmly and prudently and like a tool, will help you spread out your solitude over a great distance. Most people have (with the help of conventions) turned their solutions toward what is easy and toward the easiest side of the easy; but it is clear that we must trust in what is difficult; everything alive trusts in it, everything in Nature grows and defends itself any way it can and is spontaneously itself, tries to be itself at all costs and against all opposition. We know little, but that we must trust in what is difficult is a certainty that will never abandon us; it is good to be solitary, for solitude is difficult; that something is difficult must be one more reason for us to do it …

Borgeby gard, Fladie, Sweden, 12th August 1904
And to speak of solitude again, it becomes clearer and clearer that fundamentally this is nothing that one can choose or refrain from. We are solitary. We can delude ourselves about this and act as if it were not true. That is all. But how much better it is to recognize that we are alone; yes, even to begin from this realization … We must accept our reality as vastly as we possibly can; everything, even the unprecedented, must be possible within it. This is, in the end, the only kind of courage that is required of us: the courage to face the strangest, most unusual, most inexplicable experiences that can meet us …

Borgeby gard, Fladie, Sweden, 12th August 1904
But the fear of the inexplicable has not only impoverished the reality of the individual; it has also narrowed the relationship between one human being and another, which has as it were been lifted out of the riverbed of infinite possibilities and set down in a fallow place on the bank, where nothing happens. For it is not only indolence that causes human relationships to be repeated from case to case with such unspeakable monotony and boredom; it is timidity before any new, inconceivable experience, which we don’t think we can deal with. But only someone who is ready for everything, who doesn’t exclude any experience, even the most incomprehensible, will live the relationship with another person as something alive and will himself sound the depths of his own being …

We have been put into life as into the element we most accord with, and we have, moreover, through thousands of years of adaptation, come to resemble this life so greatly that when we hold still, through a fortunate mimicry we can hardly be differentiated from everything around us. We have no reason to harbour any mistrust against our world, for it is not against us. If it has terrors, they are our terrors; if it has abysses, these abysses belong to us; if there are dangers, we must try to love them. And if only we arrange our life in accordance with the principle which tells us that we must always trust in the difficult, then what now appears to us as the most alien will become our most intimate and trusted experience. How could we forget those ancient myths that stand at the beginning of all races, the myths about dragons that at the last moment are transformed into princesses? Perhaps all the dragons in our lives are princesses who are only waiting to see us act, just once, with beauty and courage …

Paris, on the second day of Christmas 1908
It must be immense, this silence, in which sounds and movements have room, and if one thinks that along with all this the presence of the distant sea also resounds, perhaps as the innermost note in this prehistoric harmony, then one can only wish that you are trustingly and patiently letting the magnificent solitude work upon you, this solitude which can no longer be erased from your life; which, in everything that is in store for you to experience and to do, will act an anonymous influence, continuously and gently decisive, rather as the blood of our ancestors incessantly moves in us and combines with our own to form the unique, unrepeatable being that we are at every turning of our life.

Furuborg, Jonsered, Sweden, 4th November 1904
… just the wish that you may find in yourself enough patience to endure and enough simplicity to have faith; that you may gain more and more confidence in what is difficult and in your solitude among other people. And as for the rest, let life happen to you. Believe me: life is in the right, always.
—Rainer Maria Rilke, Letters to a Young Poet 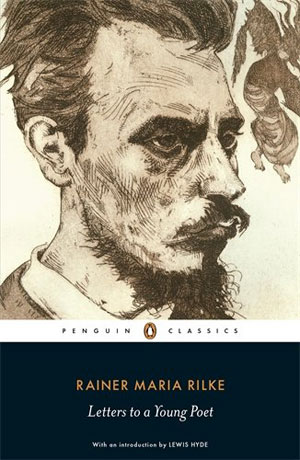