“We must take the soul back and withdraw it into itself; that is the real solitude, which may be enjoyed in the midst of cities and the courts of kings;
but it is best enjoyed alone.”

THE SADDEST THING about contemporary life is the way in which choosing not to participate in endless chatter and persiflage is deemed to be antisocial, boring, affecting a pose or even downright rude. In a world that cannot stop talking, to coin Susan Cain, the need for a more introverted, contemplative way of living has never been so coveted by those of us who simply wish not to verbalize our every passing thought and emotion within our surrounding environment.

Despite eminent gurus, such as Bhagavan Sri Ramana Maharshi, suggesting to us that it is perfectly possible to find peace of mind in the midst of the bustling marketplace or backstabbing office, many philosophers from time immemorial have advocated a retreat from familial and societal obligations into the solitary life as being the only means to acquiring emotional harmony and mental equilibrium.

Michel Eyquem de Montaigne (28th February 1533–13th September 1592) was one such thinker who championed the solo existence. A French Renaissance middle-class lawyer and civil servant, he himself retired from public life at the age of 38, locking himself away in near total reclusion in the southern tower of the Château de Montaigne in order to contemplate the nature of things and write his illustrious Essays:

Tis not that a wise man may not live everywhere content, and be alone in the very crowd of a palace; but if it be left to his own choice, the schoolman will tell you that he should fly the very sight of the crowd: he will endure it if need be; but if it be referred to him, he will choose to be alone.

Witness to the heinous crimes and carnage of the Huguenot Wars, Montaigne became increasingly sceptical of the motives of religion, politics and all forms of societal regulation, preferring to put his trust in reason alone. His writings—informal, personal compositions reflecting upon subjects as diverse as the education of children, cannibals, smells, prayers, the human mind—thus became a means for examining his own conscience, illustrated by his motto: “What do I know?”

An advocate of the classics, Montaigne quotes liberally from a vast array of Latin scholars—Seneca, Marcus Aurelius, Horace—lending his prose authority and gravitas and harking back to a time when civilization understood the need to live a life grounded in imagination and virtue.

“On Solitude”, number 39 of a collection of scores of essays, is a particularly potent piece of prose, wherein the very nature of human existence is appraised, and in particular the vainglory of political and civic office, a hotbed of avarice and greed, ambition and lust. Despite acknowledging it is the mental realm that is the root cause of all our problems, if we are to have any hope of finding inner stillness, we must remove ourselves completely from all the ties that bind:

Our disease lies in the mind, which cannot escape from itself; and therefore is to be called home and confined within itself: that is the true solitude, and that may be enjoyed even in populous cities and the courts of kings, though more commodiously apart …

Now, since we will attempt to live alone, and to waive all manner of conversation amongst men, let us so order it that our content may depend wholly upon ourselves; let us dissolve all obligations that ally us to others; let us obtain this from ourselves, that we may live alone in good earnest, and live at our ease too.

Only in solitary confinement, Montaigne argues, is it possible to take stock of our lives, dissolve attachments and rediscover equipoise and peace. Indeed, exchanging one set of circumstances for another—livelihood, career, spouse—is merely exacerbating the problem and the cycle of pain and suffering will persist until we have sequestered and repossessed our own souls.

He concedes that the renunciate life is not always possible for the average man (we must remember that Montaigne was extremely wealthy and therefore had the economic means to live separately from society); nevertheless, in the manner of Eastern philosophy advocating dispassion and detachment, we must develop a state of living whereby we reside in the world and yet are not of it:

Wives, children, and goods must be had, and especially health, by him that can get it; but we are not so to set our hearts upon them that our happiness must have its dependence upon them; we must reserve a backshop, wholly our own and entirely free, wherein to settle our true liberty, our principal solitude and retreat.

And in this we must for the most part entertain ourselves with ourselves, and so privately that no exotic knowledge or communication be admitted there; there to laugh and to talk, as if without wife, children, goods, train, or attendance, to the end that when it shall so fall out that we must lose any or all of these, it may be no new thing to be without them. We have a mind pliable in itself, that will be company; that has wherewithal to attack and to defend, to receive and to give: let us not then fear in this solitude to languish under an uncomfortable vacuity.

Moreover, in the twilight of our years, we should not fear a descent into solitude and silence but rather embrace it willingly, regarding such a state as release from worldly demands and obligations, leaving us the space and time to caress our spirits and soothe our souls:

Solitude seems to me to wear the best favor in such as have already employed their most active and flourishing age in the world’s service, after the example of Thales. We have lived enough for others; let us at least live out the small remnant of life for ourselves; let us now call in our thoughts and intentions to ourselves, and to our own ease and repose. ‘Tis no light thing to make a sure retreat; it will be enough for us to do without mixing other enterprises. Since God gives us leisure to order our removal, let us make ready, truss our baggage, take leave betimes of the company, and disentangle ourselves from those violent importunities that engage us elsewhere and separate us from ourselves.

We must break the knot of our obligations, how strong soever, and hereafter love this or that, but espouse nothing but ourselves: that is to say, let the remainder be our own, but not so joined and so close as not to be forced away without flaying us or tearing out part of our whole. The greatest thing in the world is for a man to know that he is his own. ‘Tis time to wean ourselves from society when we can no longer add anything to it; he who is not in a condition to lend must forbid himself to borrow.

Our forces begin to fail us; let us call them in and concentrate them in and for ourselves. He that can cast off within himself and resolve the offices of friendship and company, let him do it. In this decay of nature which renders him useless, burdensome, and importunate to others, let him take care not to be useless, burdensome, and importunate to himself. Let him soothe and caress himself, and above all things be sure to govern himself with reverence to his reason and conscience to that degree as to be ashamed to make a false step in their presence.

And thus, as we relinquish the temporal world, we withdraw back into our own selves, like animals removing their traces at the opening of their lairs, burrowing deep into quiet oblivion:

You are to do like the beasts of chase, who efface the track at the entrance into their den. You are no more to concern yourself how the world talks of you, but how you are to talk to yourself. Retire yourself into yourself, but first prepare yourself there to receive yourself: it were a folly to trust yourself in your own hands, if you cannot govern yourself. 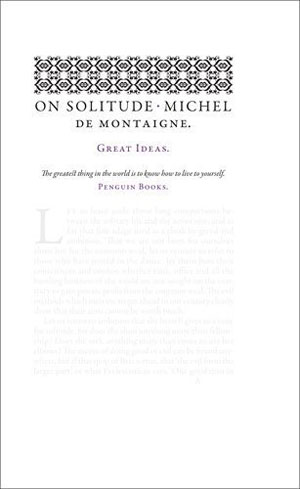