The power of now

INTO GREAT SILENCE (Die große Stille) is probably the profoundest documentary I have ever watched. Directed, produced, written, photographed and edited by Philip Gröning (born 1959), it is the culmination of over twenty years’ work, from original inception to final release. The embodiment of protracted patience, the film is an elegant and experiential contemplation on the overarching power of silence and what it means to embrace the hermitic path.

In 1984, Philip Gröning had an idea that he wanted to produce a movie depicting the “moment of time”; it was only later that the concept developed into one of exploring the rarefied world of a monastery. Among all the orders that observe permanent quietude, it was the Carthusians who fascinated the filmmaker the most, not least owing to the way in which the monks, despite living in a community, spend most of their day alone in their cells.

And thus, Gröning approached the Grande Chartreuse monastery (home of the Order of the Carthusians and founded by Saint Bruno of Cologne in 1084), nestling high up in the majestic French Alps between Grenoble and Chambéry, for permission to shoot a documentary, with the reply that they would get back to him when they were ready. Sixteen years later, he got the call.

Working entirely on his own, without crew or artificial lighting, Gröning lived in the monks’ quarters for six months, filming their daily offices, rituals and routines. With no archival footage, voiceover or musical score, the result is one of the most exquisitely poetic and divinatory works of art ever to chronicle the interior spiritual life.

Moreover, Gröning manages to achieve the utterly remarkable feat whereby the film itself becomes a sacred portal to the transcendent, a holy sacrament to the divine: “Into Great Silence dissolves the border between screen and audience with a total immersion into the hush of monastic life. More meditation than documentary, it’s a rare, transformative theatrical experience.”

Tu m’as séduit, o Seigneur, et moi, je me suis laissé séduire.
O Lord, you have seduced me and I was seduced.
—Jeremiah, 20:7

The film starts with an intimate closeup of a young monk praying on his knees. The pop and hiss of burning wood from an open stove are the only audile distraction. Immediately, we are transmuted from our temporal world into a timeless sanctuary as we are taken on a journey into the very suchness of all ephemeral things.

The exquisite camerawork, completely devoid of any egoic agenda, acts as an elegant egress into this mystical paradise where the very fabric of existence is reduced to its elemental components of light and space and time—motes of dust floating through a sunbeam; the play of shadow on a wooden floor; a candle flame dancing in a draft.

And yet it is the silence that becomes the principal protagonist, representing something far greater than simply the absence of sound or a need to maintain monastic decorum. Silence is witnessed as the substratum of all creation, the ultimate meaning of existence, its infinite embrace sustaining and nourishing all those who imbibe at her sacred fount.

Qui ne renounce pas à tous ses biens et ne marche pas à ma suite,
ne peut être mon disciple.
Anyone who does not give up all he has cannot be my disciple.
—Luke, 14:33

The cycle of the seasons from winter to summer establishes the major rhythm of the movie, within which minor motifs are developed and explored, including the communal singing of psalms and Gregorian chants in the chapel, the initiation of novice monks, as well as private biblical study and silent prayer.

Moreover, in spite of the simple mundanity of menial duties—dabbing ointment onto the wizened skin of an elder; planting carrot seeds in the allotment; feeding a clowder of feral cats—the love and commitment the brothers have for each other and their obligations elevate their actions to the noble and the sublime.

This is cinema at its most elevated; we watch in humbled awe the existence of these men who have chosen to live in holy poverty, and yet who are blessed with the greatest riches of this world—peace of mind and an openness of heart.

Amidst all the minimalist asceticism, there are wonderful moments of humour. Embarking on their weekly excursion out of the monastery after a heavy fall of snow, the monks gather up their sledging equipment and head for the hills.

With the rapture and innocence of children, their whooping laughter is utterly heartbreaking as they toboggan down an icy ravine, rendered all the more amusing by the fact they are only clad in their flowing white robes.

And in another touching scene where all the brothers are assembled in an informal circle during a period of free time, they discuss the relative merits of dabbing their fingers in water before entering the chapel, a strict practice not observed by their Trappist counterparts.

Vous me chercherez et vous me trouverez.
Car si vous me rechercherez de tout votre cœur; je me laisserai trouver par vous.
You shall seek me and you shall find me.
Because you seek me with all your heart, I will let myself be found.
—Jeremiah 29:13

Interspersed throughout the film are “living” portraits of the monks, whereby each brother simply stands and looks straight into the camera lens. Kindness, humility and benevolence adorn each of their faces, although dignity and shyness prompt some of them to avoid our penetrating gaze.

Others, however, meet our regard with equal intensity, transmitting such radiance and clarity, it is I who must avert my eyes. Indeed, such is the aching tenderness I feel for all these blessedly humble beings that I actually have to press pause in order to wipe away my tears.

Another deeply poignant section arises towards the end of the film, in which a blind monk is interviewed in his cell—the only point where an extended duration of speech is recorded—about his life at Grande Chartreuse:

Consider the anatomy of a sunbeam. Whoever feels its kindly light rejoices as if the sun existed for him alone. Yet it illumines land and sea and is master of the atmosphere.

In the same way, the Spirit is given to each one who receives Him as if He were the possession of that person alone …

Why be afraid of death? It is the fate of all humans. The closer one brings oneself to God, the happier one is.

One should have no fear of death. On the contrary, for us, it is a great joy to find our Father once again. The past, the present, these are human. In God, there is no past.

Solely, the present prevails. And when God sees us, He always sees our entire life. And because He is an infinitely good being, He eternally seeks our well-being.

Therefore, there is no cause for worry in any of the things which happen to us.

I often thank God that he let me be blinded. I am sure that he let this happen for the good of my soul.

It is a pity that the world has lost all sense of God. It is a pity. They have no reason to live anymore. When you abolish the thought of God, why should you go on living on this earth?

One must always start from the principle that God is infinitely good and that all of His actions are in our best interest.

Because of this a Christian should always be happy, never unhappy because everything that happens is God’s will and only happens for the well-being of our soul.

The final scenes return to the young monk praying on his knees and the sound of a solitary church bell; then a segue of sumptuous images—a flickering candle, flurrying snowflakes, drifting clouds. Time is irrevocably passing and yet the timeless is immortalized in serene, poetic grace.

Vois, je me suis fait homme.
Si vous refusiez de devenir dieu avec moi, vous serez injustes envers moi.
Behold I am become human.
If you should not want to join me in becoming God, you would do me wrong.
—Carthusian Monk

Into Great Silence is so compellingly beautiful, its alchemical spell weaves its wizardry long after the final frame. In my darker moments, it almost convinces me that the eremitical path is the only answer to finding any modicum of peace in this frenetic life.

And yet, the precious gift that Philip Gröning’s film has given me is that despite the outward turbulence of the workaday world, with its meaningless and dysfunctional abstractions, I may carry a sphere of solitude deep within the recesses of my own heart, sustaining my inner being in celestial silent light. 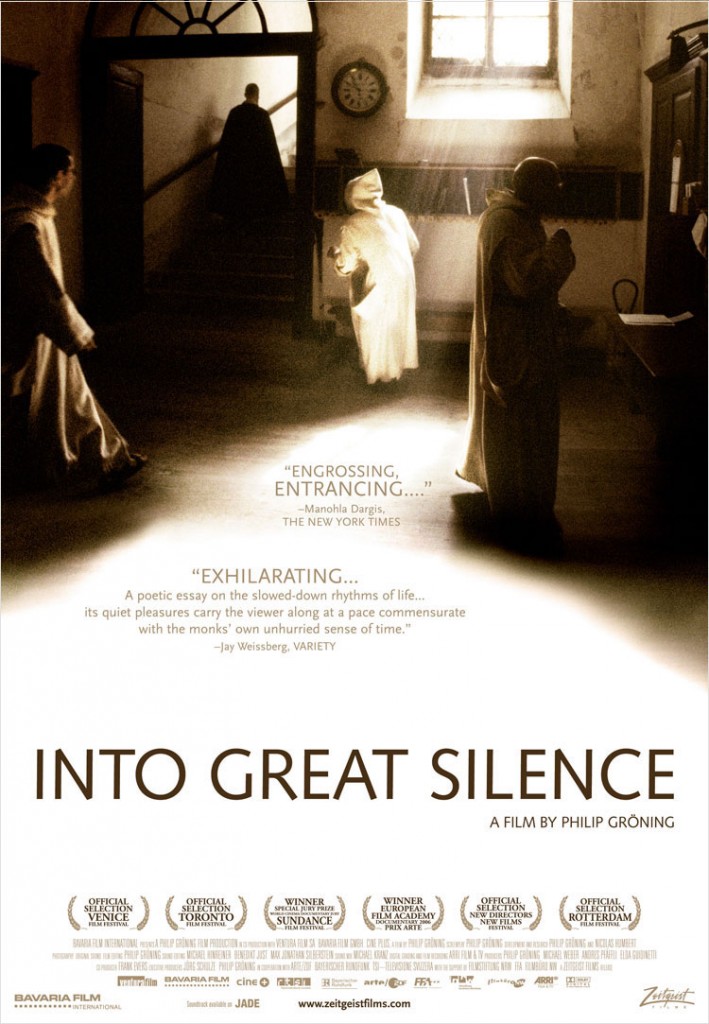