How the interior life is the only path to rhapsodic bliss

“It is love alone that gives worth to all things.”

ITALIAN BAROQUE SCULPTOR, Gian Lorenzo Bernini’s Ecstasy of Saint Teresa is one of the most powerful expressions of personal epiphany in the entire history of the visual arts, itself evoking “duende”, the Spanish word for “a heightened state of emotion created by a living piece of art”.

Indeed, the writings of one of the greatest female mystics, Saint Teresa of Ávila, ever to have lived are a potent and passionate testament to the craft of the written word and its ability to communicate the inner workings of the human heart, inspiring artists, lovers and fellow renunciates to experience the ecstatic bliss of spiritual love.

Grief-stricken by the death of her mother when she was only fourteen, Teresa Sanchez de Cepeda y Ahumada (28th March 1515–4th October 1582) embraced a deeper devotion to the Virgin Mary as her spiritual guide and mother, prompting her to take the veil at the age of only twenty-one, entering the Carmelite Monastery of the Incarnation in Ávila in north-western Spain.

Shortly afterwards, Teresa was struck down by an illness so severe that it rendered her in a coma for almost four days, and leaving her almost completely paralysed for the following three years, with her acute suffering remaining well into her late thirties. To add to her difficulties, she inwardly struggled between a life drawn in one direction towards God and contemplation and the other towards the ways of the world.

Then, in 1554, two experiences reconfirmed her allegiance to the cloistered life: the first, an image of a statue of Christ, wounded and bleeding, which compelled her to throw herself on the ground accompanied by wailing and floods of tears; the second, shortly after reading the Confessions of Saint Augustine and his hearing God’s voice calling him, she too felt a similar presence beckoning her from within. It was from this time onwards, she would later recount, that a deeper spiritual life began to unfold.

This subsequently precipitated a sequence of intellectual insights and mystical visions. In an attempt to make any sense of them, Teresa thus embarked on a literary career. Her autobiography, Life, composed in 1562, immediately attracted praise for its depth of spiritual understanding, executed with breathtaking honesty and emotional verve.

As with all her Christian sisters before her, she was at pains to excuse her “wretched” female status, indicating that she only wrote her experiences at the behest of her confessors. Writing in basic Spanish, with little punctuation and peculiar syntax, she repeatedly declares her outcast state:

For I am not learned nor have I led a good life and I have neither a scholar nor anyone else to guide me. Only those who have commanded me to write this know that I am doing so and they are not here at present. I almost have to steal the time for writing, and that with difficulty, because it hinders me from spinning, and I am living in a poor house where there is a great deal to do. If the Lord had given me greater skill and a better memory, I might have profited by what I have heard and read. But I have very little of either. So if anything I have said is right, it is because the Lord has willed it for some good purpose of His own.
—Teresa of Avila, The Life of Saint Teresa of Avila

In Life, she speaks of her early years, severe illnesses and spiritual struggles. A keen user of metaphor, she also outlines the stages on the spiritual path in terms of irrigating a garden, in her analogy of the “four waters”. The soul, Teresa explains, is a garden, formed on barren soil and full of weeds. “His Majesty” pulls out the weeds and then plants good seeds; however, it is the individual’s responsibility, the gardener, to water the garden and the four methods of irrigation described represent the stages of prayer through which the soul must pass.

The first stage, Devotion of Heart, is extremely hard, owing to the inexperience of the individual, and in order to demonstrate this, Teresa uses the analogy of drawing water from a well. The second stage, Devotion of Peace, is similarly challenging, and is exemplified through the turning of the crank of a waterwheel and using a system of aqueducts. The third stage, Devotion of Union, is where God starts to help in the process, described as using water that comes straight from a river or spring.

The fourth and final stage, Devotion of Ecstasy, is where the analogous garden is watered by the sweet rain from the heavens above:

I am now speaking of that rain that comes down abundantly from heaven to soak and saturate the whole garden. If the Lord never ceased to send it whenever it was needed, the gardener would certainly have leisure; and if there were no winter but always a temperate climate, there would never be a shortage of fruit and flowers, and the gardener would clearly be delighted.

But this is impossible while we live, for we must always be looking out for one water when another fails. The heavenly rain very often comes down when the gardener least expects it. Yet it is true that at the beginning it almost comes after long mental prayer.
—Teresa of Avila, The Life of Saint Teresa of Avila

The Lord then speaks to Teresa about the nature of the soul upon the blossoming of the fertile garden:

The journey has ended and God’s love is revealed through the dissolving of individual awareness into a deluge of divine omnipotence in a climax of intoxicating bliss.

It would not be until her early sixties that Teresa would write her spiritual masterpiece, The Interior Castle, one of the sublimest allegories on the human soul ever to be composed. Immediately, Teresa sets the scene in her work:

… there came to mind what I shall now speak about, that which will provide us with a basis to begin with. It is that we consider our soul to be like a castle made entirely out of a diamond or of very clear crystal in which there are many rooms, just as in heaven there are many dwelling places.
—Teresa of Avila, The Interior Castle

Again, Teresa employs a sequential schema for her model of religious perfection, with seven dwelling places stationed along the way: the first three representing the stages of human effort, principally through prayer and the ordinary help of grace; the remaining four dealing with the mystical aspects of the spiritual path.

Teresa is quick to establish, however, the underlying paradox of her analogy:

It seems I am saying something foolish. For if this castle is the soul, clearly one doesn’t have to enter it since it is in oneself. How foolish it would seem were we to tell someone to enter a room he is already in. But you must understand that there is a great difference in the ways one may be inside the castle.

For there are many souls who are in the outer courtyard—which is where the guards stay—and don’t care at all about entering the castle, nor do they know what lies within that most precious place, not who is within, nor even how many rooms it has. You have already heard in some books on prayer that the soul is advised to enter within itself. Well, that’s the very thing I’m advising.
—Teresa of Avila, The Interior Castle

In the fifth dwelling place, Teresa uses the analogy of a silkworm to describe the soul’s metamorphosis, spinning itself a cocoon:

Therefore, courage, my daughters! Let’s be quick to do this work and weave this little cocoon by taking away our self-love and self-will, our attachment to any earthly thing … Let it die; let this silkworm die, as it does in completing what it is created to do! And you will see how we see God as well as ourselves placed inside His grandeur, as this little silkworm within its cocoon …

Nonetheless, this is not the end of the journey. Despite its newly-found freedom, the butterfly cannot find rest, alighting hither and thither. It is in the sixth dwelling place where union with God must take place, and here Teresa switches to the familiar metaphor of the mystical relationship between two lovers, akin to the Song of Songs, in a celebration of sexual love.

And yet still there is one more final stage to go, the seventh dwelling place, wherein there is total absorption in God and the lover and Beloved are joined in spiritual marriage:

Let us say that the union is like the joining of two wax candles to such an extent that the flame coming from them is but one, or that the wick, the flame, and the wax are all one. But afterward one candle can be easily separated from the other and there are two candles; the same holds for the wick. In the spiritual marriage the union is like what we have when rain falls from the sky into a river or fount; all is water, for the rain that fell from heaven cannot be divided or separated from the water of the river. Or it is like what we have when a little stream enters the sea, there is no means of separating the two. Or, like the bright light entering a room through two different windows; although the streams of light are separate when entering the room, they become one.
—Teresa of Avila, The Interior Castle

Teresa composed many other short tracts and testimonies, drawing on her wealth of self-examination and insight. One of her lesser-known works, entitled Meditations on the Song of Songs, is probably the pinnacle of her mystical erotism, composed in roughly 1566.

Only seven chapters in length, she focuses on one particular translation of the verse, “Your breasts are better than wine” (Song of Songs, 1:2), whereby the image of Christ is seen as the divine Mother, nourishing the individual soul with his maternal milk. She writes:

But when this most wealthy Spouse desires to enrich and comfort the Bride still more, He draws her so closely to him that she is like one who swoons from excess of pleasure and joy and seems to be suspended in those divine breasts. Sustained by that divine milk with which her Spouse continually nourishes her and growing in grace so that she may be enabled to receive His comforts, she can do nothing but rejoice. Awakening from that sleep and heavenly inebriations, she is like one amazed and stupefied. It seems to me that she can say these words, ‘Your breasts are better than wine.’
—Teresa of Avila, Meditations on the Song of Songs

A lifelong friend and confidante of Saint John of the Cross, Teresa of Avila died in 1582 in Alba—preacher, prolific correspondent, polymath.

On her deathbed, she reputedly recited verses from the Song of Songs, preparing herself in readiness to be received into the bosom of Christ. Indeed, Bernini’s statue, installed in the Cornaro Chapel, Santa Maria della Vittoria, Rome, is a fitting tribute to a woman swooning in the ecstatic rapture of her everlasting love. 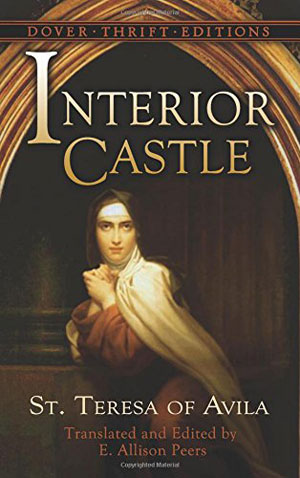