Knowledge and reverence of oneself are best of all

“Man is an earthly star enveloped in a cloud;
but a star is a heavenly man.”

FOR THOSE OF us languishing under the weight of Weltschmerz whilst awaiting liberation from lockdown, the unprecedented opportunity has arisen to take stock of our lives before the daily grind crushes our spirits and time, yet again, is no longer our own. By using this precious period of introspection, we can reflect upon something a little more profound and subtle than we are ordinarily used to, namely who we actually are.

Marcilio Ficino (19th October 1433–1st October 1499) was an Italian philosopher and Catholic priest, who devoted most of his life to the study and translation of the dialogues of Plato and the Neoplatonists from ancient Greek into Latin. As leader of the Renaissance Platonic Academy in Florence, he championed the resurging interest in the liberal arts: grammar, poetry, rhetoric, painting, sculpture, architecture, astrology and music.

Forever fearless in expressing what he believed to be true, his letters offer a unique insight—through their compassion, humour and wisdom—into the nobility of the human soul. No subject was off-limits for the Florentine, on which he wrote with elegance, flair and acuity: civic duty, marriage, virtue, friendship, providence, fate and love. Despite his vast array of material, however, Letter 41 taken from a beautifully produced edition of selected correspondence reminds us that the only issue we should ultimately concern ourselves with is the meaning of our individual existence.

Marcilio Ficino speaks of mankind’s salvation, which is knowledge and reverence of oneself.

Know yourself, offspring of God in mortal clothing. I pray you, uncover yourself. Separate the soul from the body, reason from sensual desires; separate them as much as you can; and your ability depends on your endeavour. When the earthly grime has been removed you will at once see pure gold, and when the clouds have been dispersed, you will see the clear sky. Then, believe me, you will revere yourself as an eternal ray of the divine sun and, moreover, you will not venture to contemplate or undertake any base or worthless action in your own presence. Nothing at all can be hidden from God, through whom alone is revealed everything that is revealed. Nothing of yours lies hidden from the mind, the everliving image of God who lives everywhere.

If the venerable countenance of a monarch of old inspires awe, you should always and everywhere reverence the wondrous presence of God, the king over all; and of mind the queen over the body. Rightly, therefore, did divine Pythagoras give the instruction, ‘Honour thyself.’ But he who, in the presence of himself, is not ashamed to think of worthless things and suffers the soul, which is by nature divine, to serve its servant the body, and plunges this divine pearl into the mire, such a man surely seems ignorant of his own worth and has not considered that divine saying, ‘Thou hast made him a little lower than the angels’; and the words that follow. Again: ‘I have said, Ye are gods, and all of you are children of the most High.’ Alas, most ignorant minds! Alas blind hearts! I beseech you, arise now from this deep slumber; come to yourselves one day, I beg you. For if you come to yourselves you will live happily. Why have you been looking at the ground for so long, divine men? Look up, citizens of the heavenly country, denizens of the earth. Man is an earthly star enveloped in a cloud; but a star is a heavenly man.

O soul, you are mighty if small things do not satisfy you. You are most virtuous when evil displeases you; most beautiful when you shun what is base. When you set small value on the transient you are indeed eternal. Since your nature is such, if you wish to discover yourself I pray you seek yourself where such things are. Truly the great is only found in that place where no limit is imposed; the best where no adversity reaches; the beautiful where exists no disharmony; and the eternal where there is no flaw.

Therefore seek yourself beyond the world. To do so and to come to yourself you must fly beyond the world and look back on it. For you are beyond the world while you yourself comprehend it. But you believe yourself to be in the abyss of this world simply because you do not discern yourself flying above the heavens but you see your shadow, the body, in the abyss. It is as if a boy leaning over a well were to imagine himself at the bottom, although it is only his shadow he sees reflected there, until he turns his gaze back to himself. Or it is as if a bird flying in the air and watching its shadow were to believe it flew on the earth.

Therefore leaving behind the narrow confines of this shadow, return to yourself; for thus will you return to spaciousness. Remember that there is immeasurable space in the spirit but in the body one could say infinite constriction. This indeed you can see from the fact that numbers, which are akin to the nature of spirit, increase without limit, but do not so diminish; whereas there is a limit to the expansion of the physical, to its contraction there is no limit.
—Marsilio Ficino, Meditations on the Soul, “Letter 41” 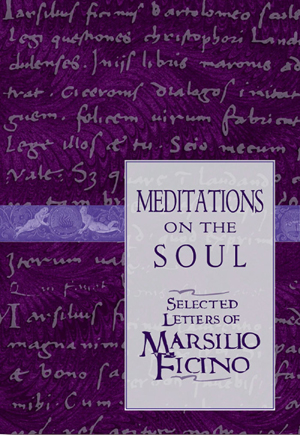