The myths of polarity

As there is no woven cloth without the simultaneous interpenetration of warp and woof, there is no world without both the exhalation and inhalation of the Supreme Self. Though the image of breathing, as distinct from weaving, makes the two successive rather than simultaneous, nevertheless the one always implies the other. Successive in time, they are simultaneous in meaning that is, sub specie aeternitatis, from the standpoint of eternity. Beginning and end, birth and death, manifestation and withdrawal always imply each other.

In Western—that is, Judaic and Christian—imagery there has generally been a tendency to overlook this mutuality and to see each life and the creation itself as unique—as a beginning, and then an end, which does not imply another beginning. Our world is linear, and the course of time is very strictly a one-way street. Nature is a clockwork mechanism, which does not wind itself up in the process of running down. In Western religion and physics alike, we tend to think of all energy as expenditure and evaporation. There is no hope for a renewal of life beyond the end unless the supernatural Creator, by an act of special grace, winds things up again.

But the Indian view of time is cyclic. If birth implies death, death implies rebirth, and likewise the destruction of the world implies its recreation, The Western images are thus essentially tragic. Nature is a fall and its goal is death. There is no necessity for anything to happen beyond the end: only divine grace, operating outside the sphere of necessity, can redeem and restore the world. But the Indian imagery makes the world-drama a comedy—a sport or lila—in which all endings are the implicit promise of beginnings.
—Alan Watts, The Two Hands of God, ‘The Cosmic Dance’

ORIGINALLY PUBLISHED IN 1963, The Two Hands of God: The Myths of Polarity was one of Alan Watts’ more obscure publications focusing on the mythology of the world’s religions; thankfully, it has been given a new lease of life this year by New World Library in editorial conjunction with Watts’ own two daughters, Joan Watts and Anne Watts.

Drawing upon his vast knowledge and insight into the globe’s wisdom traditions and sacred literature, Watts explores the stories and legends of both East and West alike, replete with all their tales of evil and good, hatred and love, male and female, darkness and light. More specifically, he reinterprets their seemingly antithetical meaning by virtue of the nondual perspective he garnered through his training in Asian philosophy, bringing a complementary and transcendent unity to their holy lore.

The polarity of Brahma and Shiva thus finds its expression in what at times seems to be the extreme ambivalence of Hindu culture—extreme in its asceticism as in its sensuality. On the one hand, there is the goal of Yoga, the meditation-discipline: to concentrate thought so as to penetrate and burn away the illusion of the world. Yoga is thus man’s participation in the inhalation or withdrawal of the world breath, in the dissolution of maya, and in return to the undifferentiated unity of the Godhead. Shiva, the destructive aspect of Godhead, is therefore the archetypal yogi, the naked ascetic daubed with ashes sitting hour after hour with his consciousness in total stillness. On the other hand, there is that exuberant delight in form and flesh, which is so exquisitely celebrated in Hindu dancing, music and sculpture, in the marvellously refined eroticism of the Kamasutra, the scripture of love, as well as in the vision of the perfectly governed society laid out in the Arthashastra, the scripture of politics. One might almost say that India had set herself the problem of exploring these two attitudes to their extremes and then of finding the synthesis between them.

This problem, stated in mythological terms, is the recurrent theme of a type of popular Hindu literature known as the Puranas. Certainly much later than the Upanishads, these are texts of uncertain date, forming a repository of myth and legend accumulated over many centuries. Notable in the Puranas is the relationship of the gods to their feminine counterparts or shaktis, the feminine symbols of maya, the world-illusion, whereby the male god is alternatingly seduced and disenchanted. Originally the God head is hermaphroditic, beyond the opposites, but at the moment of creation the feminine shakti leaps forth spontaneously, as Eve was created from the body of Adam while he slept.
—Alan Watts, The Two Hands of God, ‘The Cosmic Dance’

Interested in Asian art and culture from an early age, Alan Watts (6th January 1915–16th November 1973), British author, speaker and philosopher, moved to the United States in the late thirties, becoming an Episcopal priest for a time, eventually settling in San Francisco where he taught Buddhist studies and delivered a regular radio show, Way Beyond the West. Publishing seminal books—The Wisdom of Insecurity: A Message for an Age of Anxiety; The Book: On the Taboo Against Knowing Who You Are; and The Way of Zen—such was his ever-increasing popularity, he subsequently became the spiritual figurehead—the very embodiment of “irreducible rascality”—of the countercultural Beat movement and undertook a lifetime of travelling and lecturing on the teachings of Zen Buddhism, Hinduism and the Tao.

The Two Hands of God is an extension of Watts’ metaphysical passion into esoteric philosophy whereby he examines the theme of polarity as it manifests within all the diverse cultures of the world’s civilizations through the symbolic use of myth, art and literature: China (yin and yang), Egypt (Horus and Set), India (Brahma and Shiva), the Middle East (Cain and Abel) and mediaeval Europe (Heaven and Hell). Written in his inimitable prose style—sophisticated and yet highly readable—Watts’ text will surely become a classic alongside his other major works.

Joseph Campbell has pointed out a curious contrast between the creation myths of the East and the West, namely, that in the East there is a primordial splitting apart of the Creator whereas, in the West, the Creator remains entire and the split transpires within the creature. Actually, this split and nonsplit situation of the Creator corresponds with what, in Vedanta philosophy, is called the nirguna Brahman and the saguna Brahman—the Godhead without differentiated qualities and the Godhead with such qualities, or the unmanifest and manifest aspects of the Supreme Self. The Godhead is simultaneously involved and not involved in the production of the world, responsible and not responsible for the mystery of iniquity, omnipotently controlling everything and yet open to surprise, granting the creature freedom of will.
—Alan Watts, The Two Hands of God, ‘Dismemberment Remembered’

During the book’s composition, Watts regularly consulted his friend and fellow mythologist, Joseph Campbell, for inspiration and feedback, whose own text, The Hero with a Thousand Faces, became a groundbreaking treatise on the individual’s inner quest for spiritual fulfilment, which he coined the monomyth.

Indeed, Watts’ The Two Hands of God can be seen as a complementary companion to Campbell’s work, with his own monomythic message offering profound illumination into the warp and woof of the human condition and the means to finding peace and contentment within the very heart of the fabric of life.

… human consciousness is a monitoring system with almost the sole function of calling attention to unusual changes and disturbances in the environment. It has, therefore, an extremely superficial, restricted, and, shall we say, one-sidedly anxious apprehension of all that is going on in the organism-environment field. In particular, it is ignorant of the unbelievable harmoniousness and perfection of our constant and basic psychophysiological functions, and of their exquisitely complex ties and balances with the outside universe. It is possible, then, that any method of turning the senses back upon themselves will restore awareness of this ignored aspect of life, for consciousness is thereby led back to its own organic roots. The extreme subtlety and beauty of these processes thereupon invade consciousness like a vision from heaven.
—Alan Watts, The Two Hands of God, ‘Dismemberment Remembered’ 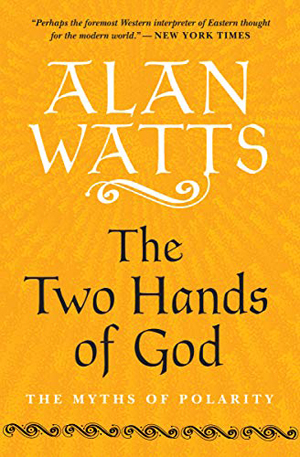